Promoting is the operative word that underlies Ponti’s indefatigable effort concentrated on architecture, design and the applied arts. 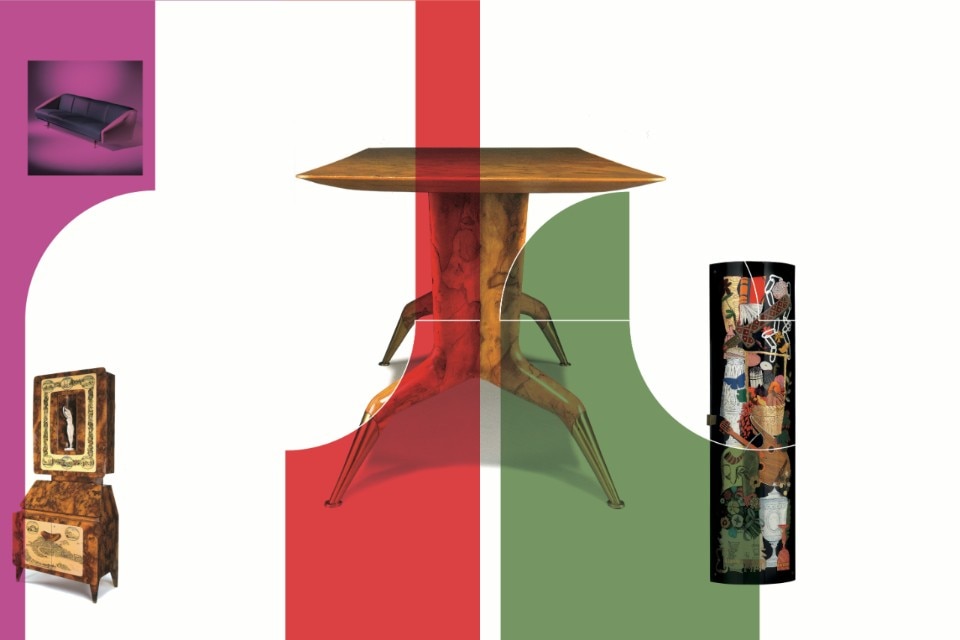 The same word seems to resound whenever the subject of vintage design is broached. If it hadn’t been for Ponti’s promotion of this chapter in Italian history, with his mass movement of pieces made in the most diverse sectors throughout the 20th century, Italian design would never have received all that attention from the international market. Ponti was a medium, with effects that were also quantitative in promoting and moving the market.This may be a long way from the stroke of the hammer which closed the bidding at a Christie’s auction in June 2005, fixing a 3.8-million-dollar price tag on a table by Mollino, dated 1949 and designed for Casa Orengo. But Ponti is firmly second in the list of Italian designers acclaimed by auction sales. While the record is held by the unassailable Turinese (their two outputs cannot be compared, considering the ratio of around 1 to 20 in the availability of works by Mollino and Ponti), Ponti was continuous and inexorable and produced quantity, whereas Mollino is rare and in the hands of a very small number of collectors.

And yet Ponti enjoyed no particular instituti- onal or commercial support. There is no really exhaustive work on his design, and still less any general catalogue which, for the type of architect/ artist always associated with medium-small prod- uction series, would be fundamental in sustaining a more solid form of collecting. Furthermore the Gio Ponti Archives, the appointed place of recognition and authentication of his oeuvre, were only recently set up. Nevertheless, Ponti’s work moves on its own legs and very energetic- ally at that, due to the relations which he cultivated in a lifetime in almost every corner of the design world, thanks also to the broad spectrum of sectors concerned.

Ponti is widely loved by the US market (where, however, an exhibition of his work in any museum of note has not been held for at least 30 years), as well as in the UK and Japan. He is pampered in France (where his designs of the 1920s and ’30s sometimes “disturb” the much more expens- ive and hyper-valued national deco). He is sought after in Italy too, where collectors can however by now only hope to procure items in the medium- low category. The values at stake point to an interesting oscillation of taste vis-à-vis his work.

While until about 15 years ago the Ponti market was led by the Deco/Novecento Richard Ginori season, with collectors mainly from the world of applied arts, today the focus of interest is Ponti the designer between 1945 and ’48 and the early ’60s: with an altogether different public. The large white porcelain cists decorated with figures in mauve and grey-gold, or the urn-like archaeological excursions in azure-blue-gold, have been caught up and overtaken by the infinite variations of coffee tables on the theme of the decomposed structure (Singer and Sons or Altamira), by the ear-chairs revisited and made lighter by Jsa or Cassina, by the zoomorphic desks with protruding drawers and by the chests with drawers in relief and brass V-feet.

Then there are the upward exceptions. In 2007 a table went for 98 thousand pounds; the coffee table from Arreaza house in Caracas of 1956 fetched 156 thousand dollars at Wright’s, and a Diamond sofa was sold for 114 thousand. Conversely, interest in the 1920s and ’30s Domus Nova furniture period is dwin- dling, thus confirming the difficulty of internationally asserting an Italian deco that was better appreciated in the 1980s. The whole accessory market on the other hand looks outstandingly robust.

On a parallel, the fakes market is prolific. A number of ceramics from the 1920s are risky by now (such as the Domitalia or Pontesca plates, repro- duced as fairly good quality fakes), along with many of the particularly “artisan” lamps in brass and plastic by Arredoluce purporting to date from 1955-58. These can be easily reproduced by skilled black- smiths, while in the works done jointly with the cabi- netmaker Giordano Chiesa, what was simply Chiesa or “workshop” stuff is liable to be passed off as Ponti. For that matter, Chiesa had already taken the liberty of turning out “parallel” products even during the original period itself, when Ponti was too busy with other things and almost flattered that his work had sparked a spate of copies. As a result serious doubts now surround his dashboard and headboard-panels. And finally: art. In the last couple of years the market for Ponti’s drawings (1000/3000 euros) has woken up, with the discovery of Ponti as primarily an artist, not necessarily tied to furniture, to architectural drawing or to his own designs. Here he is seen as Ponti the poet of the late 1960s and of the much vituperated ’70s, who played with the world and discovered the technique of painting on glass or plexiglas, with much more daring effects than in his earlier oils of the 1940s and ’50s in the “Campigli” style. Here are the materials of arte povera, such as plasticised protected plexiglas, or tracing paper, where Ponti dissolved his classical figures in what had become an ironic form detached from reality.

Like Sottsass, Ponti too could soon make a better-acclaimed entry into the canonical art market and find his own Bischofberger. In the meantime his oeuvre seems to represent a last territory free to attentive and cultivated Italian collectors, before the remaining Ponti items are swallowed up to fetch sky-high prices in America.

Manolo De Giorgi, architect and critic, has worked on the editorial team at Modo and Domus.
He has taught at the IUAV in Venice and currently teaches Interior Architecture at Milan Polytechnic. He has curated a number of exhibitions, including “A Design Museum in Italy” (Milan 1995).