In 1984 the great architect and designer, icon of the starchitect era, made her debut on Domus, starring on the cover and in a conversation with editor Alessandro Mendini. 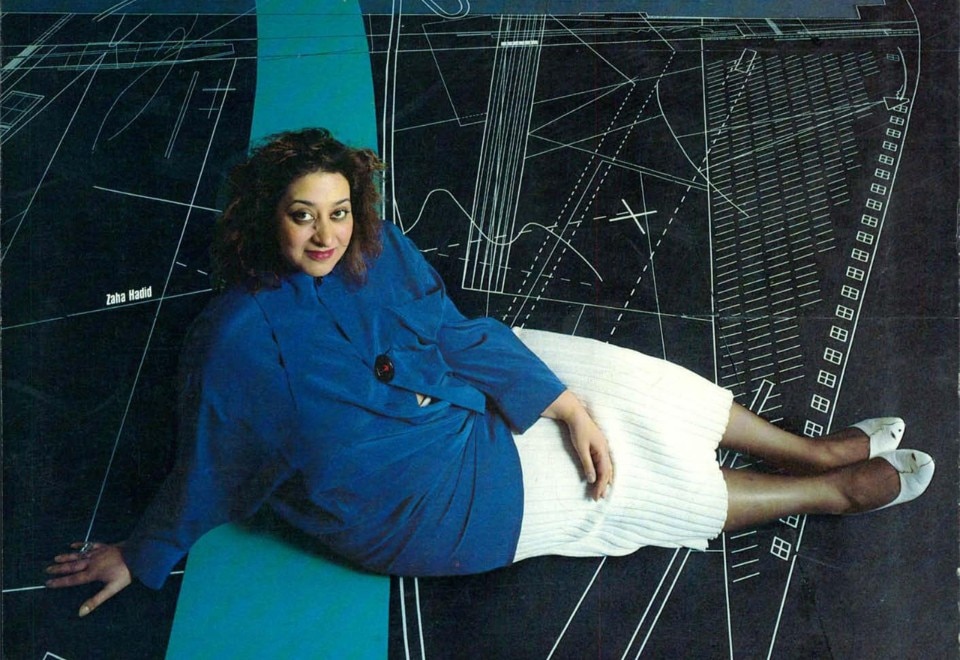 In Alessandro Mendini’s first Domus run, the cover portrait and the Colloquio at the opening of each issue soon became moments of great importance, where pivotal figures of international architectural, art and design scene would pass by to synthetically make a point on their current positions and projects. In 1984, it was the turn of a young Zaha Hadid, coming from the legendary Architectural Association environment of the 70s, now a teacher at that same school, and the fresh winner of a major competition in Hong Kong. Her reflections on her role as a designer, as well as  on her future prospects, opened issue 650 in April.

You are known especially for your drawings of architecture, where you combine virtuous techniques with the historical suprematist idioms and that of electronics. How do you situate your work within the architectural panorama today?
It is not for me to place my work in the architectural panorama of today. What I had hoped was that it might be understood not on the level of aesthetics or graphics but, more importantly, as the implication of such an architecture at this moment in time. I would like it to be seen as work relevant to the latter part of the twentieth century, the projected territory of the next one; in the significance of modernity beyond its formal implications and the emphasis on the programme as the only vehicle to explore future territories in architecture.

You teach Architectural Design at the Architectural Association in London. Do you think architecture can be taught?
Facts could be taught but thinking cannot. For me teaching is a learning experience and that is why it excites. Our role in it as teachers of architecture is that of directing and guiding future generations, to the understanding of architecture, the developing of ideas and ultimately to the implementation and execution of these ideas. Design is a philosophy and can only be self-taught.

You have just won the Hong Kong Peak Competition, one of the most important to be announced in recent times. Do you feel fulfilled in your drawings or is your problem building?
Drawing is a very exciting and interesting medium, the one I enjoy most in architectural representation. Let’s say the one I can manipulate the most to date. It is not only used to illustrate architecture and describe it but through it one can explore territories of design, and it can also act as a way of telling the story of that architecture. As for the Peak, ultimately to build it will be the most fulfilling and rewarding for it certainly was never seen as an exercise in drawing ability.

Does design interest you? Do you consider design and architecture very different to each other?
Design is an aspect of architecture and at times cannot be separated from it. Design is a system of thinking which does not only rely on talent for there is no substitute for intelligence. Without both  there can be no architecture.

Mention a few phenomena, things or persons that interest you.
I thought the age of phenomena was over or am I wrong?  This might seem odd, but quite frankly the one thing that intrigues me the most is the function of the human brain as a guiding force.

Read also: The world’s most Googled architects and designers
Share