The Italian director took part in the XIII Milan Triennale in 1964, invited by Umberto Eco and Vittorio Gregotti, with two experimental short films interpreting the concept of leisure in modern times 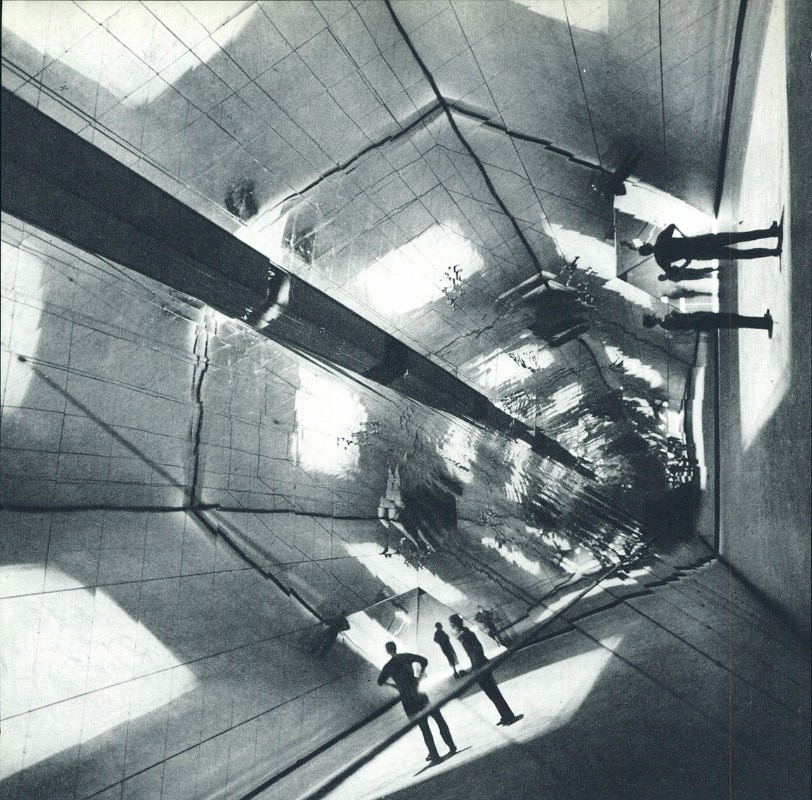 It was 1964, when Umberto Eco commissioned the young Giovanni Brass, aka Tinto, to make two short films for the XIII Milan Triennale, in the edition dedicated to leisure. The first section was curated by Eco and Vittorio Gregotti, the graphics were entrusted to Massimo Vignelli and the sound to Livio Castiglioni: it was one of the most evocative and popular Triennials.

It reflects on the concept of leisure and above all on its quality: themes such as sport, travel, cinema, entertainment, dancing and holidays are investigated through memorable setting ups. Nanda Vigo and Lucio Fontana’s virtuous works, Gae Aulenti’s interpretation of the moment of joy when one arrives at the sea, represented by the chorus of large Picasso women hurling themselves towards an infinite beach, in a warm, dazzling light amplified by mirrors.

The spectacular nature of the setting ups, “The brilliant and negative symbol of this Triennale”, we read on Domus of those years, directed by Gio Ponti and Cesare Casati, seems to have overshadowed the industrial production, which was hardly perceptible: “If the space dedicated to production had been larger at the Triennale, it could have let in many other examples (perhaps relegated to the exhibition warehouses) which instead will have to wait either for the next Triennale or be known in other ways”. (Domus 417, 1964)

The short films that Brass made for the Triennale, Tempo lavorativo and Tempo libero, are planned at the end of the first section, inside the “Kaleidoscope”, a pyramidal structure designed by Gregotti, Lodovico Meneghetti and Giotto Stoppino, covered with mirrors, which multiply and amplify the walkable space until the orientation is cancelled, “Abstraction of the present to isolate the concept of leisure”. (Domus 417, 1964)

Thirty-one-year-old Brass had recently returned from Paris, where he had the opportunity to work at the Cinémathèque Française, the historic archive that preserves and promotes the French film heritage and around which the protagonists of the Nouvelle Vague such as Jean-Luc Godard, Roberto Rossellini (whose pupil and assistant Brass was) and François Truffaut, who in the meantime had captivated audiences with his first feature film Les Quatre Cents Coups.

The French experimental cinema influenced the young Brass’ language. Umberto Eco had been struck by his film Chi lavora è perduto (also known as In capo al mondo), released in 1963, the story of a young unemployed anarchist who wanders around Venice bored and aimless, a film that “(...) Amidst imbalances and lapses in taste, has snap, flair and a few pages of disconsolate effort, halfway between Rossellini and Godard”, Morandini reports.

For the Triennale, Brass drew on archive footage collected for his previous work, Ça ira, il fiume della rivolta (Thermidor), an editing of archive images documenting the horrors of war, taken from news reports of the time. Thus, he produced Tempo libero and Tempo lavorativo, two ten-minute videos, made up of a hammering sequence of frames: an acrobat, a hot-air balloon, a dancer, a man riding an ostrich, Seine’s view, traffic, Paris, a dancer again, card players, men in swimsuit, a band. And then, in Tempo lavorativo, images of factories, machines, men at work, in traffic, men welding, hammering, producing.

One does not have time to focus on the subject when one moves on to the next image, and the next, and then again in his iconic style that reveals the masterful editor that he is. A feeling of disorientation and anxiety, in which the viewer is completely lost by the absence of a narrative. The young director wants to express alienation, the inability to distinguish the quality of time: in everyday life, everything is done and perceived in a frenetic, superficial, bulimic way. People work to produce objects to be consumed in their leisure, and live it waiting to go back to work. The showing has its effect, the videos spin on the mirrored walls, stun, hammer, alienate.

People work to produce objects to be consumed in their leisure, and live it waiting to go back to work. The showing has its effect, the videos spin on the mirrored walls, stun, hammer, alienate

The spectators are involved, with their spontaneous gestures, in the mechanics of the reflections and rhythms. A contemporary game of images and ideas, following the theme “we are never free

The two rare videos are available in the Triennale di Milano Audiovisual Archive, where it is possible to retrace the 1964 exhibition through a rich heritage of images.