The philosophy of graphic design as told by Falcinelli 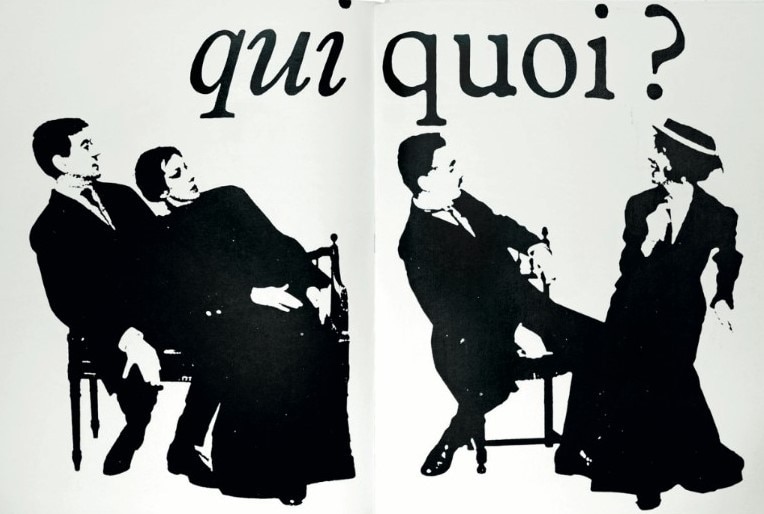 Graphic designer and design theorist, Riccardo Falcinelli is one of Italy’s best-known art directors. Specialized in editorial graphics, his graphic studio has edited the publications of publishers such as Einaudi, Harper Collins, Laterza, Zanichelli, but also large companies and institutions.

“I personally deal with publishing, but graphic design can also be found in the packaging of a fruit juice,” Falcinelli tells us. “In the contemporary world, the most diverse artifacts fall under graphic design: from the layout of a book to road signs, from the appearance of a cereal box to the interface of a smartphone. The quintessential example is that if you take a random graphic design object, you get either the flyer for the neighborhood pizza or the post office bulletin. Functional objects. But if you take a history of graphic design, at the end you find more artistic things. You find posters, posters, objects collected at MOMA. In design, there is always a double step, it should inevitably be like that”.

Already the author of successful essays such as Critica portatile al visuale design, Cromorama and Figure – dedicated to the mechanisms underlying visual culture – he has recently published in collaboration with Einaudi the new work Filosofia del graphic design, an anthology of great ideas on design. “I have been teaching for about 25 years, and I had the idea of translating some key texts on the history of graphic design for quite some time. However, convincing a publisher to produce such a text is no easy feat. Publishers are always a bit perplexed. They prefer to talk about the history of art, and architecture. Design and graphics always come a bit last,” Falcinelli tells us. “The truth is that the world has changed, since we all have a computer, graphics have increasingly become a general cultural topic. Today, for example, anyone has to deal with fonts. Anyone composes a text. It is no longer an esoteric knowledge for insiders”.

The graphic designer, as a profession invented in the 20th century, is something that no longer exists.

“I have chosen texts or figures that have been read, commented on, that have sown seeds that have led to future discussions. The volume contains forty essays by graphic designers – from Moholy-Nagy to Lissitzky, from Munari to Morris – recounting them a century since the birth of the subject. There are also some texts by lesser-known authors, such as Earnest Elmo Calkins who is, however, the first founder of an advertising agency. He writes in the 1930s with an incredibly optimistic view of the market, a point of view that is also very far removed from the disillusions we have today. But reading him makes you realise how significant and certain influential ideas were in the 1900s. He repeatedly repeats that those who want to make a creative profession today have advertising as their only path. Some have espoused this thought, questioned by others, or even completely rejected. It has created a debate”.

The beginning of the new millennium has seen a radical change in the profession of graphic designer, to the point that it is perhaps no longer a profession with circumscribed boundaries. “I believe that since 2000, with the massive spread of graphic design as a household appliance, but especially with the advent of the internet, that world has ended and a new phase has begun. The graphic designer, as a profession invented in the 20th century, is something that no longer exists. The great authors included in this volume lived in a world where graphic design was a profession to be invented from scratch, but at the same time with perceptible boundaries. Today, however, graphics is everywhere, and being everywhere, it is done by the most diverse people and professions. A social media manager does graphics, as does a stylist,” Falcinelli continues. “Even the most recent texts, those from the 1990s, when you read them you realize how distant they are from us. They talk for the first time about teleworking as a distant thing of the future, they talk about digital aesthetics, how we should relate to bitmap images. All things that are distant to us because they have become banal everyday things”.

People also generally have a very vague idea of what a graphic designer does. The only way to make these boundaries more certain is to talk about what this profession was, who invented it.

What remains traceable to the present day, however, is the relationship between the creative profession and the market. “An incredibly conflictual relationship, and rightly so. That is why I also gave myself some major themes to explore: the graphic designer’s relationship with art and authorship, the relationship with politics, and one’s social role. Many texts I chose because they responded to or interacted with other texts. This allows you to understand how, depending on the historical moment, depending also on the greater or lesser economic well-being that society was experiencing, there is a more positivist, more enthusiastic, more progressive more critical approach to themes that, in the end are the same ones that come back,” the graphic designer continues. “The one with the industry remains in my opinion, a conflicting fact because on the one hand, we have the idea that creative professions should be free, and in this freedom they do good to society because they give us new points of view to things. At the same time, however, graphics in the end, is something that came into being precise because the industry needed it. If aristocratic and bourgeois patrons were artists, with painting and sculpture, it was the industry that needed this new type of craft”.

So what can we draw from reading these great masters? “We can draw on lessons of a method, so of general culture and of point and view on things. Not practical, of course, they worked with a ruler and a square and drew with Indian ink, today we do everything on the computer”, the designer explains in conclusion. “Like all historical questions, asking yourself when you first asked yourself some questions is fundamental for having your own cultural awareness. For any profession, cultural awareness is fundamental. People also generally have a very vague idea of what a graphic designer does as a profession. This increased confusion means that graphic designers are in a more uncertain position in the first place. The only way to make these boundaries more certain is to talk about what this profession was, who invented it, why it is done in a certain way. As long as graphics are not discussed in the pages of generalist newspapers in the same way as cinema, theatre and architecture, it will always remain a form of knowledge that is not part of the cultural debate. The common man has much more to do with a logo than painting. And yet this is not reflected in the more general and cultural debate”.