Volkswagen Type 2, the history of a shape-shifting vehicle

From beast of burden to electric, with a brief hippie detour: the Volkswagen Type 2 was the symbol of Germany's rebirth and protest, and now wants to become the emblem of the “Thunberg Generation” as well. 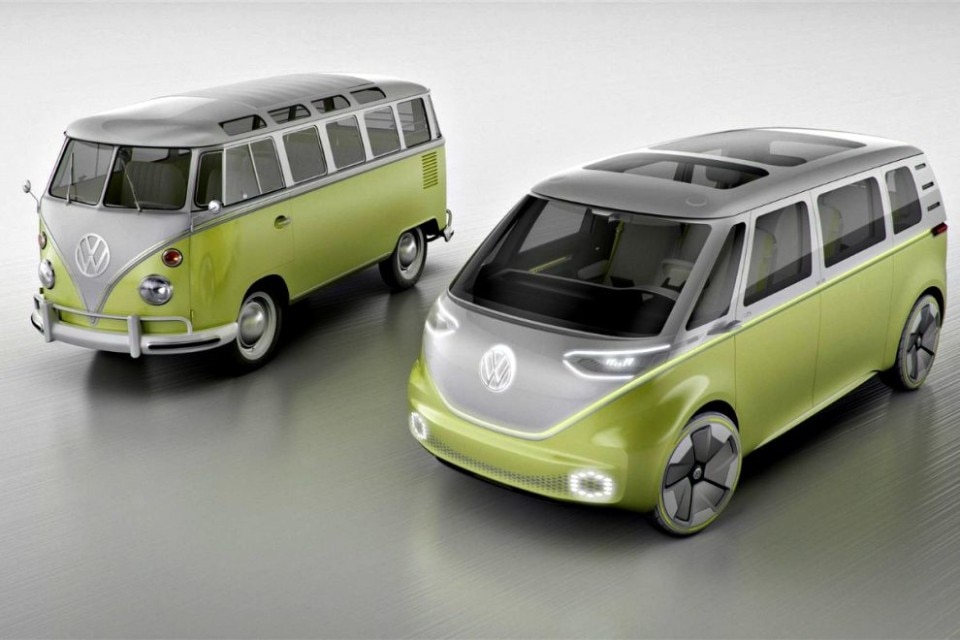 At first, it was meant to be a commercial vehicle, a beast of burden, but it soon became a symbol of freedom. It was one of the symbols of the rebirth of Europe, and today it becomes electric. The Volkswagen Type 2 is one of the vehicles that most changed their appearance over the course of the years, but after all its “father” actually made history. Type 2 is in fact the successor of Type 1, which is better known as the Maggiolino (literally “beetle” or “bug”), or Maggiolone (big beetle) in some parts of Italy. The first model can be described as rationalist, without frills, and with aesthetic features utterly devoted to function. This is no coincidence.

The original idea of this car came the Dutch Volkswagen importer Ben Pon, who had been impressed by a curious vehicle he’d seen at the Wolfsburg plant: an improvised parts-mover, called Plattenwagen, based on a Type 1 chassis. It was a rough and ready fix, for purely industrial purposes, with a small, narrow cab at the rear and a load bed at the front. And then camethe epiphany. Ben Pon drew the first sketches and presented them to the company. It was 1947, shortly after the war, and Germany needed a fresh start. Starting from the goods, of course.

So, in 1949, VW created the Transporter T1: it was practically a parallelepiped on wheels with a great cargo capacity that made it possible to transport huge amounts of goods. The Germans liked it and, like every beloved car, it was immediately given a nickname: Bulli. But why stop at transporting goods? Those who wanted to travel cheap were being tempted by the huge load compartment, and so the Transporter T1 underwent his first transformation, and turned into the luxurious Samba: it had a sunroof and a whole series of panoramic windows, and it could also be used as a minivan. In short, the germ of freedom was beginning to grow, and everything culminated in the 60s with the Westfalia, the camper without which the hippie movement would not have been the same. This was a curious metamorphosis for a vehicle created by a brand wanted directly by Adolf Hitler. But this is another story. After Europe, Bulli conquered the West Coast of the United States, making its appearance in books, t-shirts and albums. It's really hard to resist the charm of the two-tone version with its distinctive colored decorative strip.

The first version (which looked a bit military) with that split-windshield and that medieval-helmet-looking front end, was later softened in 1967, when Vw launched the Transporter T2 Bay. Everything that used to be square had become round. The windshield was now large and curved (hence the name Bay, derived from Bay-window), the headlamps looked like eyes, the air intake eyebrows, and the big VW logo reminded everyone of a nose. The Bay looked like a vehicle that had come straight out of a Japanese manga. It was sympathetic and tender, and obviously also available in a camper van version. This model, although with some aesthetic changes over the years, lasted for thirteen years in Europe, from 1967 to 1979, but lasted much longer in the developing countries. In Brazil, for example, it was only discontinued in 2013, with the Kombi Last Edition, a special (and pretty ugly) edition which was limited to only 600 units.

The myth, however, ended in the 1970s with the third generation, called T3. The Type 2 had lost its charm by becoming square, angular, unattractive: a large hatchback for large families, a minivan that was no longer a symbol but a necessity. But this was not the end, but another of the many transformations, which contributed to create the models T4, T5 and T6, which was released in 2015 and still is in production today: the Bulli of the past has become a Multivan, a means to transport a group of people in a small space. It even has luxurious and van versions but, after more than seventy years, it doesn't renounce to become a motorhome that, not by chance, has been called California.

Well, that would seem to be the end of the story, but that’s not the case. Unlike the Beetle that retired in 2019, the Bulli continues to be repeated with many variations. Apart from the T6 still in production, the Wolfsburg-based company is planning to launch an electric vehicle with level 4 autonomy in 2022. The name will be ID.7, and its design will be based on of the ID.Buzz concept that the company showed at the Frankfurt Motor Show in 2017. Between the futuristic, streamlined but muscular lines designed by Einar Castillo, it is easy to read the gruff and austere physiognomy of the famous masterpiece that made history. Who knows if, like its ancestor, the ID.7 will manage to grasp that pacifist and ecologist style that still today, after more than seventy years, continues to make an excellent impression?