All eyes on me. The comeback of a subject which is dear to Surrealism

Desk accessories, made-to-measure installations, fashion: we are being watched from all angles. In a game between guards and thieves, where judgement has been suspended. 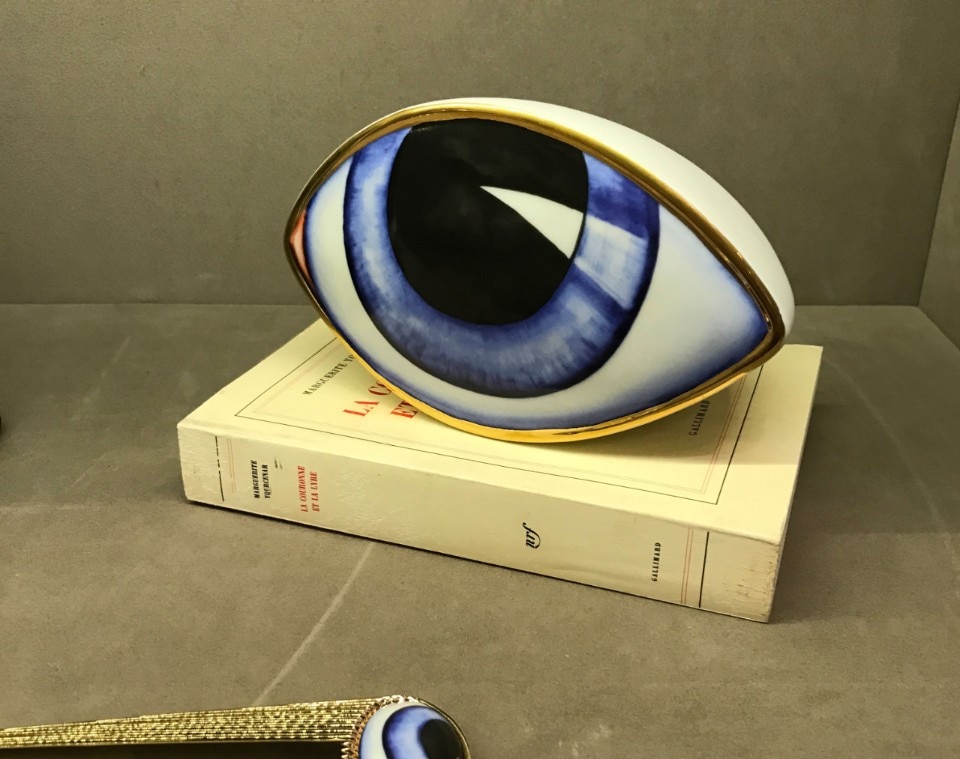 In place of “good morning”, it is obligatory to say: “Under his eye!”. You will have recognised this, of course, as the typical greeting from the TV series “The handmaid’s tale”. Restricted to the world of fiction, there is nothing much wrong with this, but no-one really wants to be subjected to a theocratic, totalitarian and biblically-inspired regime. And yet, with the sense of marvel with which one suddenly realises that everyone wears the same clothes, reads the same books, owns the same lamp, there is a plethora of objects everywhere which are watching us with inquisitive eyes. Naturally, some would say, this government has led us from dystopia to reality, but without us feeling any better. It should be said that this muddle was around long before. And the rebirth of a “registered” trademark of surrealism, greatly abused by the movement, seems particularly threatening. From the one sliced open in Un Chien Andalou by Buñuel e Dalí, to the eye-broaches by Elsa Schiaparelli, to the inevitable risk of being mistaken for a trainer of guide-dogs due to an excess of stylistic fidelity. This was the case in the film The Women by George Cukor, when the eye-covered blouse worn by Rosalind Russell provoked a comparison which was hard to deny:  “What are you made up for? The Seeing Eye?”

Is the risk the same nowadays? No, because we are not so slavish in following in the wake of that artistic movement. All the same, who knows if the eye-paperweight which resulted from the collaboration between L’Objet e Lito owes something to Le Témoin by Man Ray, the large eye which, when needed, could be laid flat and used as a sofa. And who can imagine what putting an item like that in one’s home meant. Was it a case of really deciding to be “under his eye”? If Cassina, who purchased the brand Simon, founded by Dino Gavina, a few years ago, were to decide to begin producing it once again, perhaps we will find out. For now, we can say that its enigmatic role has been substituted by public intervention. The differently-coloured neon eyes designed by Patrick Tuttofuoco for the lunettes of the Cracco restaurant represent the working and personal relationship between the chef and his companion Rosa; but just to stress the profound symbolism of the eye, passers-by could easily interpret the installation as a glam rock tribute to David Bowie. One might even wonder whether we would have a more interesting urban landscape if opticians applied the same design to their store signs. But after the last few months spent authorising the handling of personal data for the notorious GDPR, I don’t think that a pop-style substitution of the signs is in the pipeline. There are already too many inquisitive eyes around.

An example? The apple-eye in which Studio Job has placed a closed-circuit camera. In reality this is the suspicion that lies behind every representation, maybe even those printed on the Ikea cushions recently designed by the stylist Bea Åkerlund. The problem is that no-one wants to run the risk of being misunderstood. Besides, it doesn’t take much to be unconsciously drawn into the nightmare by the half-painted, half-prosthetic third eye worn by Gucci models during the most recent fashion week. And “That which I see”, two hyper-realistic eyes that the French artist Serena Carone has peeking out from a wall, together with those which Hein Koh, in Brooklyn, sews into the centre of flowers, trees and fruits, most of the time fixed in the act of crying, are there to remind us . Yet the reason why eyes are so popular is due to their subtle ambiguity, both benign and malign at the same time. Perhaps it is the easiest way of projecting a trace of depth. Therefore, while Katy Perry is touring the world with an eye-shaped stage, because, as she explained on the release of her album Witness, the cover of which had an eye-bulb looking out of her mouth: “It is the way I see, and the way in which I am your witness, and you are mine”, illustrations by the great masters are once again being used to keep an eye on pencils and pens, as is the case of the pencil case with the  vintage drawing of two eyes by Alexander Girard, which was used for the limited edition Caran d’Ache 849 pen in collaboration with Vitra. Clearly, two eyes are never enough. However, to avoid distraction, two are more than sufficient.

This was underlined at the end of 2017 by the cardboard mask which focused the gaze of Bruno Munari on the cover of his Codice Ovvio, an anastatic copy of the 1970s publication by Einaudi. A few months later, in that which, it would be nice to think, was a tribute to the great artist and designer, the masks made by Stephen Jones for Dior Couture Spring-Summer 2018 “imprisoned” the eyes in a butterfly shape which widened externally with veils of tulle which hid the mouth, neutral. Words are not necessary. What counts is the veil of mystery. And if the strength of the sun imposes the use of a pair of sunglasses, there are models with lenses in the form of eyes. For Yazbukey, Linda Farrow designed them complete with eyebrows, just like the drawings by Alexander Girard. The eyebrow (and lashes) is a detail that design applied to make up is careful not to neglect, fearful of a terrible lack of glamour. This is a risk that the pocket mirror by Hay – and who would have imagined the company moving into the world of beauty – avoids with an eye painted on the back, complete with surrounding hair. The lashes on the Cyclops mirror by Doiy are rather threatening radiating spikes, but in the cross-stitching version called Stitchit, they can be delicately embroidered.