Dario Buratto, co-founder of the design brand Stories of Italy: “With yoga, I found work ethics”

The International Day of Yoga is celebrated on 21 June. The co-founder of Stories of Italy tells us how Eastern philosophy has become intrinsic to his work as a designer. 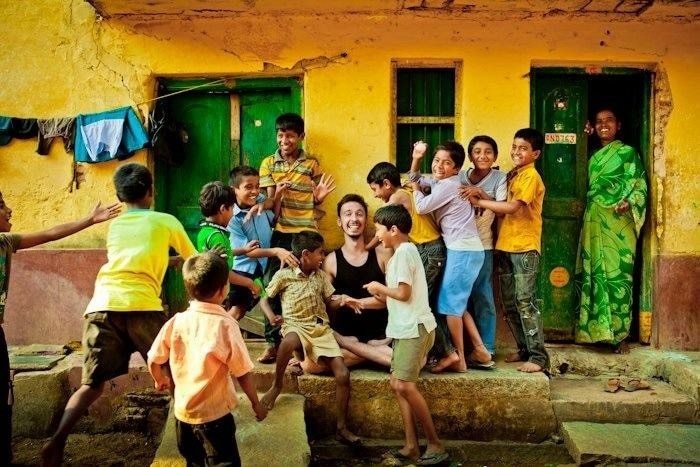 Yoga is a physical discipline, but it is also an ethical code that generally includes tolerance, non-violence and other principles. Iyengar, the father of yoga, says that without "yama" and "nyama" (the ethical aspect of philosophy) yoga is acrobatics.
“In 2010, I left everything behind and went to Asia for two years, especially India. I practiced the Ashtanga and Mysore methods, and, in a Sivananda ashram, Hatha yoga, for which I have a particular liking. I also practiced Vipassana (or insight) meditation in the Buddhist tradition in Myanmar,” says Dario Buratto, 37, one of the two design talents behind the brand Stories of Italy, co-founded in 2016 with Matilde Antonacci. Buratto tells Domus how yoga philosophy helped him become the designer he is today.

How did you start yoga?

Per chance, in 2005. I was in India, where I met a Tibetan monk in Bodhgaya, a city of refuge for Tibetans. With him I enjoyed my first lessons. I stayed longer than planned because the train had broken down. He planted a seed in me that grew over time. In 2010, I left Italy behind and decided to practice yoga more intensely. I went to India for two and a half years, which was initially going to be one month! When I returned to Italy, I opened a yoga centre in Trieste and ran it for two and a half years, teaching.

That sounds like a point of no return, when it comes to design.

To the contrary. My creative soul was reborn and I began working on the founding of Stories of Italy, meaning contemporary design made using traditional Italian techniques of craftsmanship. The big issue in my life is finding a balance between my meditative side and my creative, practical side, which is attached to materials, objects, Italy and design. For an entire decade, I experienced the two sides as being in conflict with each other. I couldn't make up my mind whether to follow one or the other, whether to become a yoga teacher or a designer. In the end, I found peace. Yoga is a physical discipline and an ethical code that calls for tolerance, non-violence and other positive values.

Yoga is a physical discipline, but it is also an ethical code that generally includes tolerance, non-violence and other principles. B.K.S. Iyengar, the father of yoga, says that without "yama" and "niyama" (the ethical aspect of philosophy) yoga is mere acrobatics" .

That's true. Asanas and the physical side of yoga are important up to a certain extent. What counts is the ethics, applied to nutrition and life. I try to apply the principle of non-violence in words, thoughts and deeds in everything I do, from my vegetarian diet to my work relationships. I use non-aggressive language even when I'm ticked off. Words are just as important as deeds. The principle of non-violence ahimsa) can be everywhere, like in thoughts that produce the practical effect of action. For me, yoga is a way of life. I do my best to put it to practice. It's my pillar, and in it I have found ethics that give me peace of mind. It is not dogmatic and can be practiced by anyone. I really love the universality of this philosophical system.

I have a strong sense of the divine. Yoga is not monotheistic or dualistic, not God versus the rest. Everything around us is divine. Reading the book of lectures Jnana Yoga (1899, Jnana “knowledge” note of editor) by Swami Vivekananda, I found my line of thought. Swami Vivekananda describes knowledge as the ultimate goal of yoga. I identify with that cosmogony.

Would you still be a designer if you hadn't practiced yoga?

Perhaps in a more conflicted way, yes. I used to be riddled with guilt for wasting much time to make useless things. Designing drinking glasses does not save lives. Yoga has allowed me to embrace my creativity, because no action is important in itself, rather its intention is what carries value. You can be a garbage collector, a designer, a nun or a president: if your intentions are good and non-violent, it's all constructive.

How do you translate this in your work?

Unlike mass industrial production that pollutes and uses underpaid labour found in the poorest areas of the world, I work only with local artisans. This way, the objects do not have a negative impact on the world, and my thoughtful and creative sides can coexist. Yoga helps me in my relationships with artisans and glass-blowers, who are tough people, always on the defensive. I have adopted a conciliatory way of speaking, which has opened the doors of the closed environment on the islands of Murano.

If all designers were to follow the yoga philosophy, how much better would the world be?
If all of them were to think this way, we would have more intelligent production chains, more care for the ethical and environmental impact of objects, and more attention during the design phase for how the object will be produced. Designers would ask themselves who would produce it and in what part of the world. Taking into consideration the entire process that leads to the final object allows you to adapt it to be more ethical. It's the right way to design things.

How do you practice?

Sometimes I do the sequence of the Sivananda ashram in Rishikesh, India and sometimes excerpts from the first series of Ashtanga. I often do breathing exercises related to respiratory awareness and rootedness in the present moment.

What is the best-designed yoga mat?

I use a mat by the brand Manduka bought online five or six years ago, and it looks as if I'd never used it.

Five millimetres. It's good for inversions and shoulder stands.