We retrace the career of the Serbian artist, who has become one of the most controversial and discussed figures, known throughout the world. From her beginnings in the 1970s to the performances that consecrated her and her most recent works. 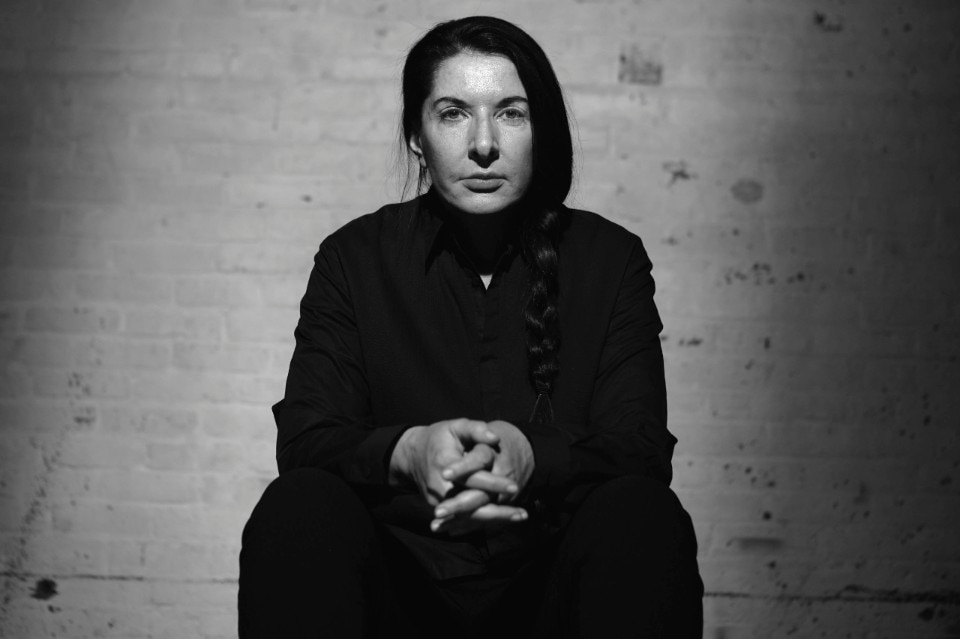 Marina Abramović is known worldwide for her provocative performances and pièces that transcend, sometimes dramatically, the dualism of body and soul, artist and individual. Offering herself as an instrument of experimentation for the viewers, Abramović has reconfigured the thresholds of physical and psychological pain and resistance.

She was born in Belgrade, former Yugoslavia, on 30 November 1946, to a wealthy family, and spent her childhood with her grandmother, Milica, being strongly influenced by her deep Orthodox faith. For many years, Marina was far from her parents Vojo and Danica, partisans during the Second World War, at that time involved in the leadership of General Tito's Communist Party. She only returned to live with them in 1952, the year her brother Velimir was born. Despite a tumultuous relationship with her mother, since childhood she found a safe space in her love of art, particularly drawing and painting.

Between 1965 and 1970, she studied painting at the Academy of Fine Arts in Belgrade, and completed her studies at the Academy of Fine Arts in Zagreb, Croatia. In 1971 she married conceptual artist Neša Paripović, and two years later she met Joseph Beuys, considered one of the most important and controversial artists of the second half of the 20th century. Marina was deeply fascinated by Beuys' happenings and Fluxus' contaminations. That same year, she collaborated with the Austrian artist Hermann Nitsch, known for his visceral works and for a practice inspired by the ritual of sacrifice.

The encounters with Beuys and Nitsch drove Marina away from figurative art. From the 1970s onwards, her research was dominated by abstraction and expressiveness related to sound and performance. In this period, she produced a series of performances in which her body was both protagonist and medium. In “Rhythm 10” (1973), presented at the Museo d'Arte Contemporanea di Villa Borghese in Rome, she methodically stabs the spaces between her fingers with a knife, wounding herself. In “Rhythm 0” (1974), at the Studio Morra in Naples, she stood motionless for six hours in a room with 72 objects that the public was encouraged to use on or against her; these included a rose and a loaded gun. Self-harm and nudity are elements that have recurred in Marina's practice ever since, thus generating interest and controversy around the artist.

Human beings are afraid of very simple things: we fear suffering, we fear mortality. What I was doing in Rhythm 0 was staging these fears for the audience: using their energy to push my body as far as possible

1975 was a turning point in Marina’s artistic and personal life, and the beginning of what she would later describe as “some of the happiest years of my life”. She met German artist Frank Uwe Laysiepen, known as Ulay, at an international meeting of performance artists in Amsterdam; it was the start of a symbiotic artistic collaboration that would indelibly affect both their lives. In 1976 Marina divorced Paripović and moved with Ulay to Amsterdam. From then on, the couple travelled extensively around Europe in an old Citroën van, together with their dog Alba. This journey resulted in the “Relation Works” series and the “Art Vital” Manifesto.

We had no money, but I felt we were rich: the pleasure of having some pecorino cheese, a few garden-grown tomatoes, and a liter of olive oil; of making love in the car, with Alba just sleeping quietly in the corner, was beyond wealth. There is no price for that

In 1980 Marina and Ulay produced “Rest Energy”, a silently tragic performance depicting the couple’s tormented relationship: in the video they are balancing on the opposite sides of an outstretched bow, with the arrow pointing at Abramović's heart. With one finger, Ulay could have killed her.

After spending a short time in Amsterdam, the couple moved to Australia where they spent nine months with the Pintupi tribe, in the Great Victoria Desert. “Nightsea Crossing”, staged at Documenta 7 in 1982 and in spaces in Cologne, Düsseldorf, Berlin, Amsterdam, Chicago and Toronto, is the result of these months spent in close contact with the Aboriginal culture. The performance consists of a prolonged couplet act of meditation and concentration, derived from the meditative technique of vipassana, which Marina and Ulay learned in India from the Dalai Lama and his mentor, the tulku Kyabje Ling Rinpoche.

Make people laugh to open their heart, and then you tell them terrible truths after, because they’re ready

from:
Marina Abramovic interviewed by Kadish Morris, The Guardian, 12 Feb 2022

In 1986 the couple flew to China for the first time, to work on an ambitious performance along the Great Wall. It was the birth of the legendary work “The Lovers”, a long walk that marked the end of their 12-year relationship and artistic collaboration. Marina started from the East end of the Wall, while Ulay from the West, walking in opposite directions until meeting to say one last, heartbreaking yet serene, goodbye.

In the following years, Marina worked on interactive objects known as “Transitory Objects” designed “For Human Use”, created by combining different materials including quartz, amethyst, tourmaline, copper, iron and wood. She moved to Paris in 1990 and was invited to take part in the exhibition “Magiciens de la Terre” at the Centre Pompidou. Between 1992 and 1993, the work “The Biography”, directed by Charles Atlas, was performed in Madrid and later at Documenta 9 in Kassel, and in theatres in Paris, Athens, Amsterdam and Antwerp. In “The Biography”, Marina and Atlas use autobiography as a diachronic structuring principle aimed at investigating identity. With Atlas she also worked on the autobiographical play “Delusional”, a multimedia and theatrical performance in two acts.

In 1997 she was invited to represent Serbia and Montenegro in the Yugoslavian Pavilion at the Venice Biennale. She made an impact with the performance “Balkan Baroque”, staged in the gloomy basement of the Central Pavilion at the Giardini, six hours a day for four days. Marina sat on a pile of cattle bones from which she cleaned residual meat and cartilage, as a ritual of ethical purification and denunciation of the massacres of ethnic cleansing in the Balkans. The work won the artist The Golden Lion.

In 2001 she launched the interactive project “Dream House”, a permanent installation created in collaboration with the Triennial of Contemporary Art Echigo-Tsumari, Japan. Guests were invited to wear pyjamas designed by the artist and sleep in beds manufactured exclusively for the project. The morning after they were asked to report their dreams in a so-called “Dream Book”. That same year, Marina staged the performance “Mambo a Marienbad” in the neuropsychiatric hospital in Volterra. The location recalled a personal story of creative madness and deep discomfort. The following year, she spent twelve days in silence and fasting in front of visitors at the Sean Kelly Gallery in New York, as part of the performance and public live installation “The House with the Ocean View”.

Only layers of meaning can give long life to art - that way, society takes what it needs from the work over time

In 2005 the Solomon R. Guggenheim Museum in New York presented "Seven Easy Pieces", a "re-performance" consisting of seven reinterpretations of works by the artists VALIE EXPORT, Vito Acconci, Bruce Nauman, Gina Pane, Josef Beuys and Marina herself. The theme of "re-performances" recurred in the 2010 retrospective "The Artist is Present" at MoMA in New York. The title of the exhibition comes from Marina's performance, in which she sat silently at a wooden table seven hours a day for three months, while museum visitors sitting in front of her in turn. The artist met 1,000 strangers without saying a word; some of them were moved to tears.

In 2016, Penguin published the celebrated autobiography “Walk Through Walls: A Memoir”, released in Italy the following year. A passage in the book, in which Marina refers to Australian Aborigines as “dinosaurs with big torsos and club legs”, caused controversy. In the same year, among the emails published by WikiLeaks before the US presidential elections, a message from Abramović to John Podesta's brother was interpreted by conspiracy theorist Alex Jones as an invitation to a satanic ritual. These are just a few examples of the speculations that have always distinguished the artist’s controversial career. She firmly denied  the allegations against her in two interviews with The Guardian.

Today, Marina continues her work at the Marina Abramovic Institute (MAI), a non-profit foundation dedicated to performance art, promoting participatory public experiences around the so-called “Abramovic Method”, an ongoing project that brings participants together in a communal experience “to connect with themselves and with others”. The project consists of a set of 30 cards, each inviting participants to follow different instructions, such as “walking backwards with a mirror” or “opening and closing a door”. Predictably, the “Abramovic Method”, which claims to stimulate a “higher creative consciousness”, resulted in further criticism and questioning from the public, branding Marina as kitsch and labeling her work as “celebrity art in its emptiest form”. Criticism has also been prompted by the presence, among the followers of the Abramovich Method, of pop stars such as Lady Gaga and Jay-Z.

Scepticism aside, Marina Abramović’s work has always divided critics and continues, for better or worse, to stimulate discussion. With her provocative gestures and performances, Marina has succeeded in establishing herself as an icon of performance art and her career as a total work of art.

The first UK retrospective, postponed due to the pandemic, will be held at the Royal Academy in 2023.