“I always do my utmost to ensure that my work plays the dual role of both mask and mirror...” 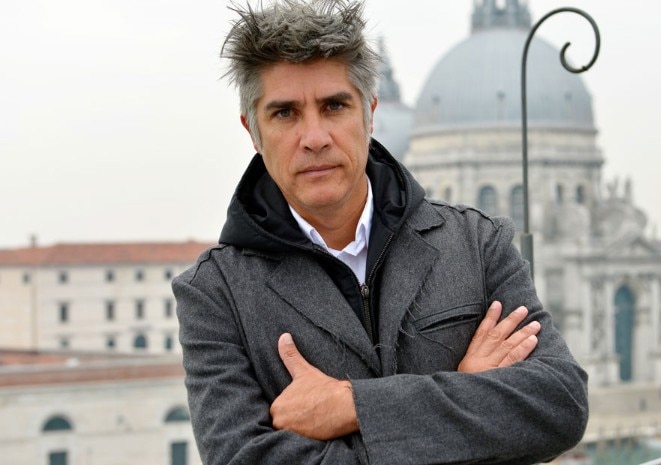 Alejandro Aravena, born in Santiago de Chile in 1957, is considered to be one of the most interesting figures on the new generation international scene.

He graduated in architecture at the Pontificia Universidad Católica de Cile in 1992, and completed his studies in Italy, where he attended courses in Theory and History at the University of Venice (IUAV) and the Academy of Fine Arts.

On returning home in 1994 he set up the Alejandro Aravena Architects firm, and since 2006 has been the executive director of Elemental S.A., an organisation which promotes the improvement of social conditions, operating in the sectors of infrastructure, public space and housing through the creation of experimental works for disadvantaged sectors of society.

Aravena’s first work was the construction of the “House for a Sculptor” (1997), a home organised in spans constructed on the side of a hill in the La Florida area, a block which is both austere and apparently modest, with technical characteristics (the external brick cladding, for example) which are the result of the desire to rely entirely on the skill of the workers employed for the construction.

The following year, the architect obtained the first important public contract, that for the construction of the Mathematics Department and Physics Library at the Universidad Católica de Cile (1998-1999), his most important principal, developed as an autonomous organism yet constructed in the spaces between the existing buildings on the campus, with a layout developed according to a mathematical equation.

From this moment on, the theme of school buildings became particularly important for Aravena, who first took on the construction of the “Huelquen” Montessori school in Santiago de Chile (2001) and then a further expansion of the campus at the Universidad Católica, the Medicine Department and the Library (2001-2004), this time constructed vertically to best exploit the small plot available, located in a particularly dense area.

The result is the construction at the front of the court of that which Aravena defined as “a vertical cloister”, a device to favour interaction amongst users, while offering more secluded and introverted areas for reading. The building also pays tribute to the work of Louis Khan, above all in the use of “light boxes”, small, naturally-illuminated atria in the basement which could be used for reading.

The “Torres Siamesas” (2003-2006), the information technology centre, were commissioned by the Universidad Católica: the decision was made to construct a transparent double skin to resolve the problems regarding excessive isolation which would have resulted from the adoption of a classic curtain wall. Externally the facade is of a single sheet of glazing which has scarce insulating properties but excellent durability and ease of maintenance, while inside, a layer of fibre cement offers the opposite. An opening in the roof allows for the natural elimination through convection and classic chimney dynamics of the hot air that accumulates in the gap between the two layers. The works for this institute were completed with the School of Architecture (2004) and the Angelini Innovation Center (2014).

The other fundamental theme of Aravena’s work is that tied to the activity of Elemental, which through the support of Catholic organisations and Copec (the Chilean Petroleum Company) carries out social and public urban planning and construction works.

The name of the programme is an indication of the desire to produce the basic elements for low-cost housing which each individual family is then invited to complete according to their particular needs and economic situation, often carrying out works themselves. The proposed model is that of a district in which relationships of solidarity and collaboration between residents are encouraged, characterised by a high degree of “porosity” which allows for the expansion of the residences, and the repetition of a base core of thirty square metres which is not designed as a minimal house, but is proposed as a nucleus around which to build a medium sized home (in Chile the average house is 72 square metres).

These general principles have, until now, been applied on various occasions, including the Elemental Quinta Monroy in the deserted city of Iquique (2003-2004), the Elemental Ranca complex (2004-2007) and Elemental Lo Esejo (2005-2007) in Santiago del Chile. The Elemental method has also been applied in the reconstruction of the city of Constitución, which was struck in 2010 by a devastating earthquake and consequential tsunami, and in areas of Equador and Mexico (Monterrey) suffering from similar fates, applying on a grand scale that which has been described as “incremental design”.

Thanks to the technical and design support workshops coordinated by Elemental architects, the inhabitants – who are also involved in the design stage through an articulated process of participation – have begun to expand and modify the buildings and spaces in the district, from the addition of furniture and of parts of their old houses, right up to more complex expansion works.

The works of the Chilean architect which are currently under way include the student residences and refectory at the Saint Edward University in Austin, Texas (since 2006), the Dobal Fernandes House in São Paulo, Brazil (since 2007) and the Elemental social centres, the application of a prototype to be copied in all of the residential districts involved in the programme.

Aravena, whose works have been presented at the San Paolo Biennial (2007), the Milan Triennale (2008), the International Architectural Exhibition in Venice (2008 and 2012), at the MoMA in New York (2010) and at the MA Gallery in Tokyo (2011), was the director of the 15th International Architectural Exhibition in Venice (2016). His most famous publications include Los hechos de la arquitectura (1999), El lugar de la arquitectura (2002) and Material de arquitectura (2003).

Aravena has served as a professor at the Architectural Association of London (1999), at his own University (since 1992) and at Harvard University (2000-2005). The winner of numerous awards, he has received the Silver Lion at the eleventh International Architectural Exhibition in Venice (2010) and the Pritzker Prize (2016) with the following motivation:

Alejandro Aravena has pioneered a collaborative practice that produces powerful works of architecture and also addresses key challenges of the 21st century. His built work gives economic opportunity to the less privileged, mitigates the effects of natural disasters, reduces energy consumption, and provides welcoming public space. Innovative and inspiring, he shows how architecture at its best can improve people’s lives.