With her images, Noémie Goudal constructs enigmatic work capable of introducing intimate and introspective questioning of our presence in cosmic space. 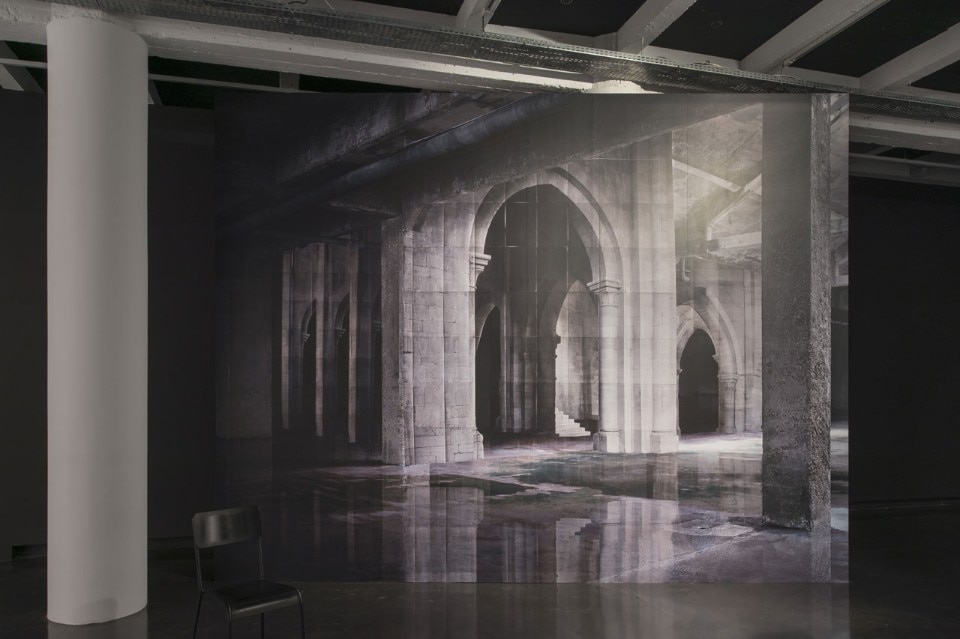 Le Bal is a Paris institution dedicated to understanding the way in which images interpret reality. Its cultural work has now spanned ten years of continual reaction to the complexity of contemporary forms of the image as “documents”, probing their aesthetic and social status. The scheduling of the events capitalises on the exhibitions to develop – always in an innovative manner – reflections on the complexity of contemporary work. Within the programme, the organisation parallels scientific events, evenings with films, and concerts, promoting continual interchange between the disciplines.

This was the case too with the recent exhibition “Cinquième corps” focusing on the work of the French artist Noémie Goudal, who presented her reflections on the act of photography as a key gesture capable of creating intense phenomenological interest in the observation of “space”. The exhibition could be read as a journey of initiation into a metaphorical space imagined and restored by the artist herself. The visitor was welcomed by three images from the series Southern Light Stations, which redefined the surreal globality of the symbolic image of the world. Noémie Goudal constructs enigmatic work capable of introducing an intimate and introspective questioning of our presence in cosmic space. The metaphorical gesture of “looking beyond” has always been a great inspiration for the construction of a visual language of the imagination created by the symbolic figures and forms that have their origins in the Aristotelian model of the universe. Their visual restitution spotlights the desire and the curiosity involved in the discovery of a space that plays with reality and fantasy, imagination and scenic truth.

Speculation is understood here as an act of observing clarified by its etymological roots in the speculum, or the reflected image. The layout within the exhibition made it possible to combine the experience of multiple images, bringing them together through the use of a stereoscope created like a three-dimensional figure within the room. This complex restitution of the real is capable of underlining the power of photographic artifice in the apparent reconstruction of the three-dimensionality of fragments of places. Noémie Goudal’s visual work explores the image and its reflection through the study of perspective: the observation of other worlds is translated into a continual cross-reference to the reflection in the image and of the image.

Moving to the basement level (which in the Golden Twenties housed the dance room that gave the gallery its name), the layout of the exhibition reconstructs a monumentality of space, as is evident in the large format prints of the series In Search of the First Line.

The images in Observatoires emphasise Noémie Goudal’s obsession with the formal reproduction of space. The architectural objects reproduced restore allegorically the contact between different, obscure and unknown spatial realities. The work illustrates the power of photography as a two-dimensional object able to construct and reproduce the three-dimensionality of places. But the image is not the result of a process of research and observation. Noémie Goudal investigates symbolic architectural shapes to photograph them, reproducing them on A4 sheets, and then reconstructing their mise-en-scène with a theatre wing constituted by a place that is enigmatic and metaphysical in its basic essence. The revelation of the fiction through the artist’s voluntary highlighting of the two-dimensionality of the image makes these objects even more enigmatic, emphasised too by their direct relationship with the background.

The exhibition extended as well to the cafe, a place of experimentation with the relationship between food and images. Here Noémie Goudal returned to her work of visual analysis. Presented was a vast catalogue of images gesturing to the complexity of a journey into iconographic research. It is a journey that has involved the artist in visual and three-dimensional work, in an attempt to express the gesture of observing through the archetypical form of the observatory.