The new Fondazione Trussardi nomadic exhibition takes us into the heart of the Brera district to encounter the site-responsive work of artists Allora & Calzadilla inside the historic Palazzo Cusani. 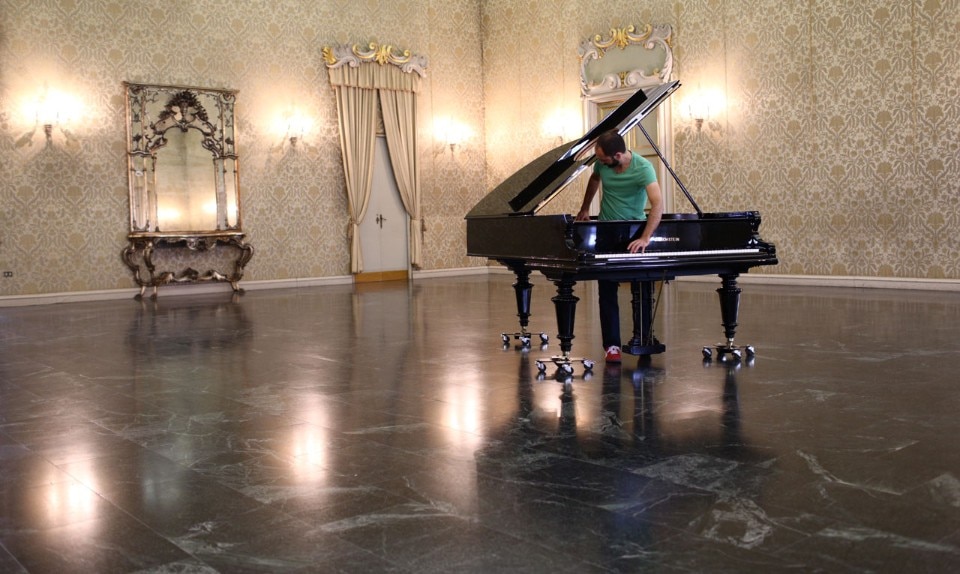 A caravan stuck in the ground in the Ottagono of Milan’s Galleria Vittorio Emanuele opened a great hole at a busy point of passage, the most trafficked by tourists and a certain class of locals going about their business in what, alongside the Duomo and the Madonnina, is one of the city’s most iconic and symbolic spots.

That happened in 2003 and was, of course, no “road” accident but an installation by Michael Elmgreen & Ingar Dragset, part of an exhibition that coincided with the debut of the Fondazione Trussardi initiatives under the artistic direction of Massimiliano Gioni. For ten years now,  he has been seeking out and getting himself  into the most charming and unusual places, unknown to the people in the city and transfiguring them for a few months with the work of contemporary artists from all over the world.

This informed nomadism has resulted in the discovery of urban secrets, the pride and joy of a city that conserves all architectural styles – from Gothic to baroque, Art Nouveau, eclectic and Rationalist. A magnitude of cubic metres of architecture and bearer of strong contradictions, precisely because of often inappropriate use of and scarce sensitivity for contemporary art and cultural development on the part of the city’s governance (suffice to remember the famous dilemma over the need for a contemporary art museum, which every European city has).

Historic mansions, industrial warehouses, abandoned cinemas, military barracks and a civic arena – buildings that are temporary or temporarily “liberated”, to adopt the language common to those who, over the last two years, have embarked on the targeted occupation of city buildings that are abandoned or unused in order to rescue them from inexistent management or to flag the scandal up to a local population that nine times out of ten is unaware of their very existence. For some time now, this has been the work of a Foundation, a private body, albeit with different premises and aims.

The end purpose is to show the public, awoken to a previously unseen form, places that have become closed and dusty, spaces converted for private services and stately mansions not yet refurbished. Each time, the rule is the same and involves already famous artists in a process of rethinking their research and installing artistic imagery in unusual or mummified places.

This process contains the very substance of the site-specific action, by which the place is the environment inside which the expression and character of the language takes shape. This makes it all the more important to see the Fondazione Trussardi’s latest initiative from this angle, one that takes us into the heart of the Brera district to encounter the work of Allora & Calzadilla inside the historic Palazzo Cusani, a private residence that is still used as a base by the Italian Army and NATO’s Rapid Reaction Corps. Inside, it conserves the original late-baroque stuccowork and frescoes as well as the Radetzky ballroom, named after the Austrian general who inspired the Strauss march of the same name, composed to celebrate the return to Milan after the revolutionary uprisings of 1848.

The artistic duo, who live in Puerto Rico but met in Florence more than 15 years ago, have here come across what must be interesting humus considering the research that accompanies much of their production. A complex hybrid of sculpture, performance and musical experimentation, it is the product of historical, political and social exploration that has developed a reference theme involving war, conflict and, more recently, the origins of music and its implications on the evolution of the species.

We talked to them in one of the loveliest rooms in the Palazzo hosting their work and include some interesting parts of our long conversation below.

Domus: What is the relationship between site specific and displacement? How does site specific relate to this place, and its historical and current uses?

Guillermo Calzadilla: I think this exhibition is more site responsive than site specific. That is to say, it takes a site and sees it as a moment, a place, a discourse. A starting point from which to examine the historical and programmatic aspects of its material configuration, namely the chandeliers, stuccowork and frescoes, features peculiar to this place. We considered both the structural and historic aspects of Palazzo Cusani, a practice we always tend to adopt. We aren’t interested in dealing with a place as a neutral location.

Jennifer Allora: In this sense, I believe there has been balanced research into the history of Palazzo Cusani. That is, not directly linked to its formal aspect alone and the fact that it is an army and NATO base. We believe that this place represents a symbolic setting, a point of connection that informs and contextualises aspects of our past work. Reworking them inside here becomes an interesting way to create a dialogue between the works and the architecture, and its historic and current functions. This place offers many opportunities to risk interesting interpretations and reflections. Generally, we try to construct our work in a similar manner: we start from different materials that seem very different and combine them via an artistic choice to create new meanings.

Domus: The Radetzky Room for example, represents an evident connection between the work and the function of the place. It has been the place of the piano and now there is your piano work (Stop, Repair, Prepare: Variations of ode to joy for a prepared piano, 2008).

Guillermo Calzadilla: Exactly, but this is not the only time this has occurred. There are others. Returning Sound, the video of a motorcycle with trumpet welded to the exhaust and ridden by a young Puerto Rican activist, is an example. The island of Vieques, in Puerto Rico, has been used as a NATO base for war simulations for more than 60 years now, since WWII.

Domus: I’ve been always fascinated by the work Sediments Sentiments (Figures of the speech). The sculpture looks like the result of an untold disaster. An apocalyptic setting performed by real singers, able to re-enact some of the most famous political speeches of the world, from Kennedy to Gandhi. What is the relationship between object and performance?

Guillermo Calzadilla: There is always a link between object and action. A certain type of object prompts a natural action. A chair, for example, on which the body can sit or lie, depending on what feels more comfortable. In this work, this type of relationship between object and action does not exist because it is a shapeless mass of matter and the negative space is inside, determining the type of action and function. Every object, in some way, conserves a ghostly trace of an action, which determines a different function for it. We often play with this, misusing the object’s function, although the choices are always very specific and thought through.

Jennifer Allora: On changing the meaning by misusing an object to suggest another function or another way of relating to it, in the case of Sediments, Sentiments, one of the things we were thinking of was the moment when, in Opera, the heroes find themselves lying on their deathbed, a few minutes before they die. What matters is this juxtaposition between the horizontal lying down and the vertical political discourse spoken to an audience, and also playing with this type of relational dialectics. In other performances, it made more sense to work with a readymade, as in the case of the piano. The “rock” was not supposed to look real but fake and function as a “prop” for the action. Sometimes, if a form doesn’t exist, it has to be built to “frame” the performative part of the work.

Domus: How did you make the Apotome film?

Jennifer Allora: Analysing the issues centred on the difference between human and animal and the concept of human being in natural history. That is why it was filmed at the Museum of Natural History in Paris and involved an experiment conducted in 1798: a concert for two elephants brought to Paris as war booty (from Holland) or more probably as a gift. That was the first time that a city, a civic institution, was turned into a sort of zoo. Some musicians thought it would be interesting to play a concert for the animals, selecting pieces of music that might provoke a reaction in the elephants.

It doesn’t seem at all strange today but at the time it was a very radical experiment, an attempt at communication between different species. At that time, natural history was studying the definition of the species categories and it was also when people from Africa and Latin America were being displayed in cages, for example. It was an interesting experiment, testing whether music is a universal, non verbal, language, an interstitial space where several species can communicate.

After conducting research into the voice, we arrived at Tim Storms, the person with the lowest voice in the world: 8 hertz, inaudible subsonic frequencies that Tim is able to produce because his vocal chords are twice as long as normal. Once again, this represents what can be considered the result of an evolutional change. If we think in terms of evolution, we could say that his future descendants will be able to develop hearing that hears these frequencies.

Domus: What is the role and concept of the public in your work and research?

Guillermo Calzadilla: The way we work always involves the relationship with the public. Our works always have an audience from the very beginning, perhaps just one person. This means that nothing I say, think or try to analyse represents just my own point of view and an interrogative practice develops. Questioning becomes important in the construction of the work and, when the work is completed, it preserves this potential, which continues the process of interrogating nature: why things exist, what they mean, what is their function. In this way the ideas are interrupted or inverted. All our works explore the relationship between proportion and disproportion, in the social, musical and experiential sense.

Jennifer Allora: Another thing is that, looking at the history of performance in the history of art, the issue of the public is always linked to someone who is acting, which presumes real involvement, interaction and participation. We do not work in this way; we look for a more critical approach and we start from the concept of what the role of the performer is. It is important to clarify how we see the collaboration with the people we involve because they are always people with special skills. If we need a pianist, for instance, they must, on the one hand, be able to work with us and experience playing Beethoven’s Ninth Symphony backwards; on the other, and this is stems yet again from Attali and his ideas on composing, the pianist must compose a personal interpretation of the symphony and the performance is, most of all, for him/herself.