Milan, Paris, Rotterdam and Athens. Cities very different from each other but united in an attempt to tackle the climate change crisis. 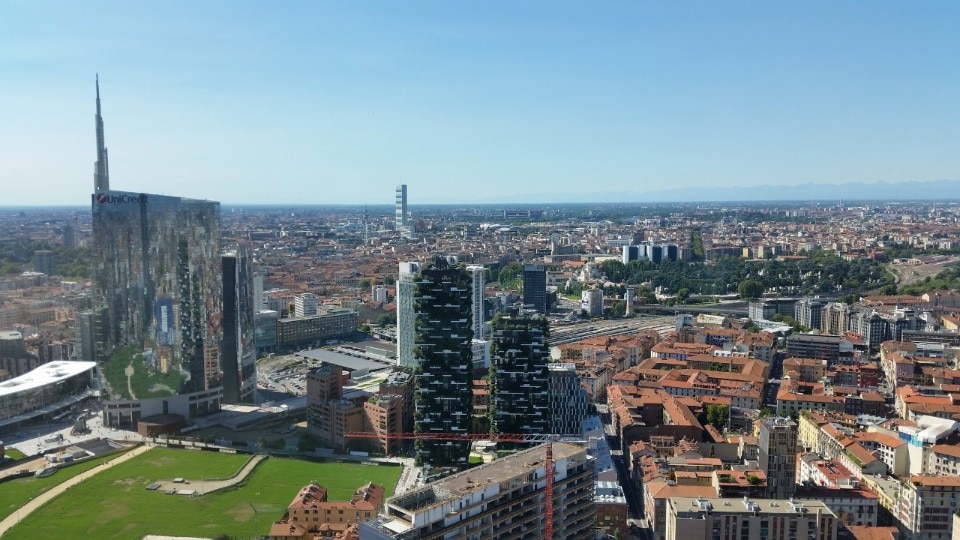 The word resilience is a popular one in the heated debate on climate change. “Climate resilience” refers to the capacity of a socio-ecological system to absorb stresses and maintain function in the face of external trauma caused by climate change. It means to adapt, reorganise and evolve into more desirable configurations that improve the sustainability of the system, leaving it better prepared for future climate-change impacts. How to design in a resilient key? We have been witnessing excellent examples where public and private players have enacted virtuous processes with the final aim of resilience – economic, social and environmental. Their impact is tangible and replicable.
Although cities are among the main causes of climate change, many of them in Europe and beyond have been employing strategies that adopt measures of local response to global problems.

In Paris, resilience is being applied to schoolyards. As a member of the network 100 Resilient Cities since 2014, the city has taken up the fight against urban heat islands. The densest city in Europe in terms of the built environment, Paris has but 14.5 square metres of greenery per inhabitant. One initiative has allowed Paris to repossess a public good that was underused both functionally and eco-systemically. The city’s schools constitute the most densified public building. Each citizen lives under 200 metres away from a school. Their asphalted and artificial pavements contribute to the formation of heat islands. The project Oasis Schoolyards (where Oasis stands for Openness, Adaptation, Sensitisation, Innovation and Social ties) rehabilitates school playgrounds through co-design and active participation. Asphalt is substituted with porous materials and vegetation. Water drainage is improved. Shading and cooling systems are installed with the aim of offering the yards to the entire community, also after school hours. Launched in 2018 with 3 pilot areas, Oasis will be replicated in other schoolyards to the tune of 761 locations in total.

In Rotterdam, the fight against climate change is taking place on the rooftops. The city is taking advantage of its well-distributed rooftop property (1 square kilometre in the centre, and 14.5 square kilometres in all) to become more resilient.

For years now, the municipality has been at the forefront of the installation of green roofs, but the Rotterdam rooftop programme does not only consider nature as a response to the emerging climatic and social concerns. Four colours represent four functions. Green is for vegetated roofs. Blue is for rainwater gathering and the slowing of drainage during heavy precipitation. Yellow is for the production of renewable energy. And red is for spaces and functions of social relevance. With this programme, Rotterdam is contributing to the decrease of tons of carbon dioxide, adapting to the growing climate challenges, and improving the city’s liveability and appeal.

Cities around the Mediterranean are getting started. This area is indicated by experts as being subject to the biggest climate changes. Compared to the average increase of global temperatures by 1 degree centigrade since pre-industrial times, Southern Europe has registered a rise of 1.4 degrees. This is caused by an increment in the number and duration of heat-waves, whose repercussions (combined with high levels of air pollution) are serious health threats.

To improve its adaptive ability, Athens launched the Heatwave Action Plan in 2016, aimed at protecting vulnerable members of the population (the elderly, children, people with cardiovascular conditions, and the obese) from the effects of heat-waves. In exposed areas of the city, experiments are underway to plant new green areas, use cool materials and make shade to create cool districts and routes. The city has a system to alert the population to heat-waves. The application Extrema (also launched in Rotterdam, Paris, Mallorca and Milan, developed in collaboration with the National Observatory of Athens) uses real-time data regarding temperature, humidity and discomfort indexes that can be accessed from smartphones and computers. With its integrated and complementary approach, Athens is demonstrating its ability to make structural changes to the urban morphology and offer technological and digital services, all with the final aim of protecting its population.

Milan too has developed a vision of resilience. One initiative is the ambitious Piano di Forestazione Urbana (“plan for urban forestation”) that calls for the planting of three million trees and shrubs in the metropolitan area by the year 2030. In addition to the numerous advantages that accompany the plan in terms of eco-systemic benefits (the absorption of carbon dioxide and particulate matter; the decrease of heat islands and hydrogeological risk), the plan experiments with shared ways of designing, planting and maintaining the public and private spaces destined to host the new urban greenery.

Designing resiliently means surpassing the traditional separation into sectors with which urban transformations are approached; optimising resources; and turning our attention to parts of the city that were forgotten by past regeneration policies. Along these guidelines, the group Officina Urbana is operational. It is configured as an interdisciplinary task group animated by public workshops in collaboration with Arup Italia. The aim is to develop a method of analysis and a definition for a new resilient vision on a neighbourhood scale. Its pilot project is the Niguarda district, where the gradual realisation of projects will take place, from the renewal and connection of existing green patches to the reactivation of socially appealing amenities and the widening of pedestrian routes and bicycle paths. It will introduce practices of temporary reuse and tactical urban planning.
Niguarda is the pilot area for another initiative that has recently commenced. With technical support from Arup Italia and Esri Italia, the study of the roof inclinations of public buildings, their layout and exposure to the sun will allow us to determine their potential resilience in terms of sustainable energy and green roofs.

The above-mentioned examples show the concrete ability to construct an entirely new capacity to meet the challenges posed by climate change. They point to how we can reinvent our cities. The concept of resilience has become a path of constructive transformation. For all too long, urban growth was accommodated without considering aspects of liveability, comfort and quality that are connected to the city’s capacity to respond to recurrent traumas. The design projects described here illustrate how resilience can hold together the complexity of current and future conditions in order to guarantee urban well-being and therefore human well-being. Is this our final goal or just the beginning?

Piero Pelizzaro (Vicenza, 1982) is chief resilience officer for the City of Milan. In the past he founded Climalia and collaborated with the IUAV, the European Commission, the Kyoto Club and AzzeroCO2. His essay Le Città Resilienti was featured in the magazine Altreconomia.