The Milan of Blocco 181 is not Milan: what if TV redesigns the city

The new Sky TV series aspires to be the next Gomorrah through an urban fairy tale. In Blocco 181, the Italian capital of fashion and design becomes a hyper-city. Milan as the symbol of a global tension between centre and the suburbs, even if it means annihilating its identity. 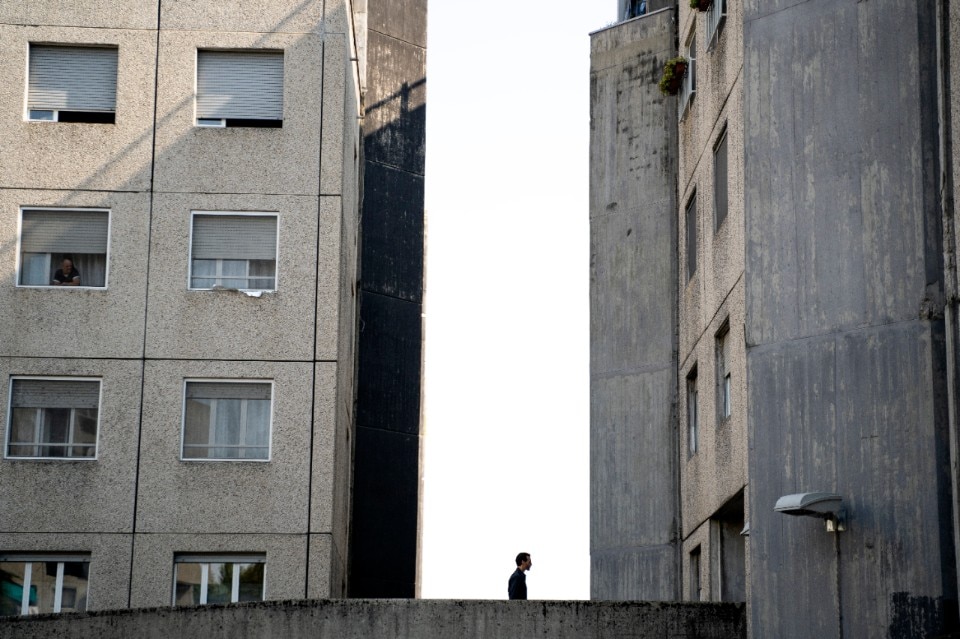 On Corso Vittorio Emanuele, the main pedestrian shopping street in the centre of Milan, open-air photo exhibitions are now part of the urban design overlooking the Milan Cathedral. The large format photos are mounted on large metal frames. Chronologically, the latest photo depicts Blocco 181, showing scenes of it in the days of its debut. Shot by Gabriele Micalizzi, they are hyper-saturated and fluorescent, and tell of high-rises, gang wars and sunsets on the city limits. For a proudly “suburban” series, an exhibition in the city centre seems paradoxical. But perhaps it is not.

Milan is changing – with an overwhelming vertical growth. A unique case among Italian cities. TV and cinema are seizing the opportunity, looking for glimpses of the new glass towers, raising drones that capture the changing skyline. Over the last few months, this has happened with Monterossi (Amazon Prime) and Fedeltà (Netflix), and last year in Silvio Soldini’s feature film 3/19, to name but a few. Even Succession – one of the most celebrated (and award-winning) American TV series of the last few years – landed in Milan, with a crucial episode of the final season set in the CityLife towers, the city’s signature of transnational economic power. The suburbs, those of the high-rises, are an exception, as Dikele’s Zero (Netflix), with scenes in the Gallaratese district, and precisely Blocco 181.

In Blocco 181, Milan is a big town, divided with a blatantly Manichean division between centre and the suburbs. On the one hand, the centre is made up of the flamingos of Villa Invernizzi, chic Oriental supermarkets, obviously beautiful houses, luxurious cars, great wealth, and the sun shines quite a lot. On the other hand, the suburbs are represented by the Blocco, a place all concrete and depression-tinged colours, and a battleground between the Italian criminal underworld and the Salvadoran Misa “pandilleros”. Between rich and poor, centre and the suburbs, wealth and malaise, the city is held together by cocaine, which in the stereotype of Milan as a drinking and snorting city is as ubiquitous as the background radiation that permeates all the universe. In fact, according to recent studies, Milan actually ranks in the bottom 20 of the European cities with the highest cocaine consumption.

“Blocco 181 wants to give back an idea of contemporary suburbs, without any indication of geographical origin”, location manager Marco Bergamaschi tells Domus. So, what is presented in the story as a single, consistent location is actually crumbled along the entire outer ring of the Lombard capital. The Blocco is actually made up of the agglomeration of council houses in emblematic suburbs such as Barona and Corvetto – close to each other in the TV series but miles apart in reality. On the other side of Milan, in the Niguarda district, streets have been reconstructed “as if a string of shops, now closed, were still open”, Bergamaschi adds. The very name of the Blocco comes from a building that was in Giambellino, now demolished, he explains.

Read also: The 10 most anticipated TV series and films of 2022

The Latinos have their fort around Via Lombroso, an area that will soon be radically redeveloped. It is the reality of Milan that Blocco 181 does not tell, that of a city that turns neighbourhoods inside out, gentrifying them, shifting the axis of the centre further and further away, and relocating the suburbs into an undefined suburb that begins on the outskirts of the city.

The Milan of Blocco 181 is not the Milan we know; yet it is at the same time Milan, a Milan that rises to the absolute role of a global city where the characters of the metropolis are elevated to symbolic apparatuses easily recognisable everywhere. “Hyperrealism is different from neorealism”, Bergamaschi says, who adds: “undoubtedly, Blocco 181 is more a hyperrealist comic strip than a documentary”.

The protagonists of this Milanese West Side Story are a modern-day Romeo and Juliet, a threesome of young people with blatant cultural, sexual and emotional fluidity, three mavericks on the run from the families and ideologies they have grown up with. They find their safe haven in the bourgeois home of the rich one among the three, all lounges and walk-in wardrobes and design pieces in the very city centre, a stone’s throw from the mythical flamingos – the Milan of the 1% of the population who lives around Villa Necchi Campiglio. They thus fit a bit predictable design of life, as if the suburbs were an evil no one can escape from, that one is only saved from by relying on centripetal forces that carry the little boy from Rozzano to safety on top of CityLife's Liebeskind residences.

Seen as it is portrayed in Blocco 181, it is hard to really blame them: a place of fear and violence, as could only be imagines by those who have only seen the suburbs in the photos of an exhibition in the city centre, or from the top of their glass towers. And it is a pity, because Milan’s suburbs are much more than that.

In a role that at first seems only marginal, but is then destined to evolve, stars Salmo – the controversial Italian rapper from Sardinia (but Milanese by adoption). Among other things, he has produced the soundtrack of the new TV series. More than any art form, it is rap that has given voice to the suburbs of this millennium. Worldwide as in Milan, while cities were growing and growing, like concrete waves over the heads of people, the mythology of the suburbs was spreading, played from teenagers' JBL speakers on public transportation and their motorbikes, flooding into AirPods through Spotify and definitely into our life. Rap has grown into being the new pop music, and its landscape has become ours, from Marracash’s Barona (a southern outskirt of Milan) to Sfera Ebbasta’s Cinisello (a suburb to the north of the city), to Paky’s Rozzi.

The latter, in his early twenties, with his album and above all with the abusive concert at the council houses in Rozzano, has built from scratch an extremely dense and cruel image of the Milanese suburb, hyperreal and yet sincerely truthful, in short, the image of Blocco 181 seems to be pursuing without achieving at least for the first six episodes (out of eight, those that were in the press preview). Because perhaps only in its most unrestrained sincerity, and not in the manufactured abstraction, does the suburb reveal itself completely, and become – to quote Bergamaschi – hyperreal.

The Sky TV series remains a delightful love and crime story with Milan in the background (and a bit of Genoa’s washing machines), sometimes with a Milanese cabaret tone that brings it closer to a dark comedy than to Gomorrah or Suburra: Blood on Rome, and that almost by counterpoint confines its most highly imaginative moment to the theme song: the Misa takes Piazza Affari and the Madonnina ends up in the suburbs, the city centre is roasted by a hooded “pendellero” in a scene resembling the Attack on Titan, and a rider (or a coke dealer?) steals the place atop the pedestal of the famous statue to Victor Emmanuel II facing the Milan Cathedral.

Read also: The new West Side Story is a film about the dark side of gentrification
Share